Good Day y’all! How many of you remember your senior year of high school? #insertraisedhandhere I remember it like it was yesterday. It was by far the best year of high school because duh, graduation!!! But before graduation, there is PROM!! For me, it is probably one of the most exciting days of my young adult life. I spent the entire day preparing, getting my hair and nails done, going to dinner and topping it off with dancing making memories that would last a lifetime. It would have been a dream come true had I been crowned Prom Queen but no such luck for me but it ok because the evening was still magical.

Today’s review features a duo from Courtne King of Little Black Dress Polish. This duo came about when Courtne’s son’s girlfriend’s mother, say that 5 times fast, requested a custom polish to go with her daughter’s prom gown. To their surprise, the couple was crowned prom king and queen and are now off to college in the fall.

As I was swatching and preparing this blog, my 10 year old looks over and says, “mommy, this color matches the color of my bridesmaids dress I wore to the wedding.” By golly, she was right. The colors of my wedding were blue, silver and white (yes, we went with Dallas Cowboys colors as hubby is a die-hard fan). So I pledge today to wear these polishes on my next anniversary, Feb.14th!!

Let’s jump into the swatches!

**All swatches are done using Commitment Issue Peel-off Base Coat by Vapid and Tonic Topper by Tonic (shiny) and Matte Me topcoat by Jior Couture (matte). Swatch photos are taken using artificial lights.**

A true navy blue cream with a sprinkle of shimmer. Swatch shown in 2 coats but opaque enough in 1. 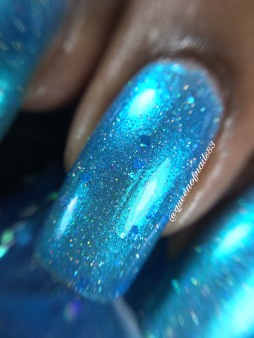 Swatch shown with 2 coats of Prom Queen over Prom King.

Formula / Application: POLISH – Prom King is smooth like a baby’s bottom. No streaking and self leveling, no issues to report. I highly recommend a base coat to avoid staining of Prom King which is highly pigmented. Prom Queen, has some settling of glitters which is expected but a good shaking over even allowing the polish to sit upside down will help.  OIL – very hydrating and moisturizing. Not overly greasy and absorbs into cuticle and nail bed nicely. Personally, I was not a fan of the smell but hubby and my girls liked it. I added a little vanilla and coconut fragrance oils. I’ve only been using it for about a week and while I haven’t notice any difference in my nails, I do love how long-lasting it is even through hand washing.

Overall: I think Prom King and Queen are complete show stoppers. There are so many things you could do with them, wear them together or apart and they’ll still look amazing. Look for these polish in the near future when I do my 4th of July mani!

Did you go to your high school prom? If so, tell me the color of your dress? If not, what color dress would you have worn? Let me know in the comments